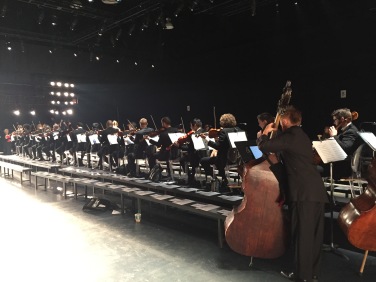 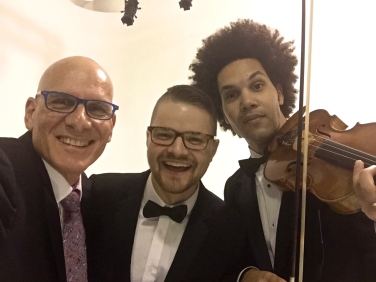 New York Orchestras Entertainment was asked to provide a 20-piece all male orchestra for Fashion Week in NYC. The event titled “Concept Korea” fashion show, co-hosted by the Ministry of Culture, Sports and Tourism and the Korea Creative Content Agency  aka Kocca. The orchestra was conducted by the famous Korean composer Cho Wonhang (pictured above).

The event, at Pier 59 Studios in Chelsea Piers, featured three womenswear designers; Kim Tae-geun from YOHANIX, Kim Hee-jin from KIMMY J and Park Yoon-hee from GREEDILOUS. NYO Entertainment performed during the runway show while the models walked around the orchestra (see video link below).

The orchestra featured 20 virtuosi performers from around the world.  Bill Messinetti along with violinist Peter Kiral organized the musicians according to the request of composer Cho.  The composer requested six first violins, six second violins, three violas, three cellos and two contra-basses which suited his compositions.

The six hundred guests included many photographers, press, models as well as buyers from the fashion industry.

Here is a link to a video of the finale: Concept Korea Finale

Taken from Billboard magazine article:While Hallyu, or the Korean Wave, predominantly revolves around pop cultural exports, the phrase extends to style, occasionally referred to as K-fashion. Because of their popularity, Korean actors and K-pop stars are regarded as trendsetters worldwide and several have made appearances at New York Fashion Week in the past. While prominent Korean stars were absent from Concept Korea this year, models walked down to several K-pop songs rearranged to match the accompaniment of the New York Orchestra, including Baauer’s “Temple” featuring M.I.A and G-Dragon, the frontman of K-pop boy band BIGBANG. The finale, “Good Boy” by G-Dragon and BIGBANG’s Taeyang was a fan favorite, with many audience-members opting to stay until the end of the performance to record one of Korea’s trendiest exports and post it on Instagram.